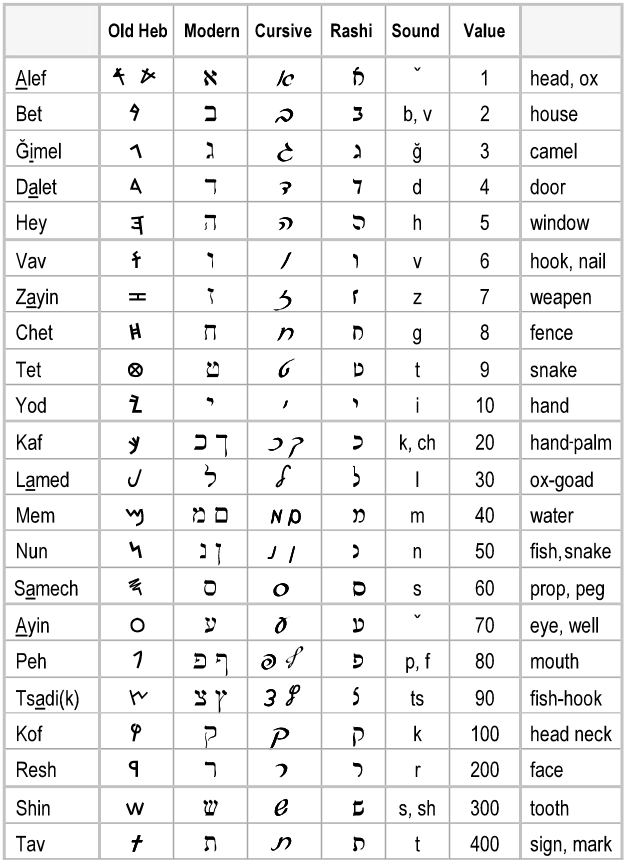 The Old Hebrew or the Paleo-Hebrew alphabet is an offshoot of the ancient Semitic alphabet, identical to the Phoenician alphabet. It dates at least back to the 10th century BCE. Some Paleo-Hebrew fragments of the Torah were found among the Dead Sea Scrolls.

This square typeface style of writing is the one most commonly seen in Hebrew, like printed Hebrew Bibles and most printed Yiddish books. It is referred to as block print or sometimes Assyrian text.

There is different style used for handwriting, in much the same way that cursive is used for the Roman (English) alphabet.

The Rashi script is a semi-cursive typeface for the Hebrew alphabet. It is customarily used for printing rabbinic commentaries on the Hebrew Bible and the Talmud. It is based on 15th century Sephardic semi-cursive handwriting.
The purpose of this special script was to distinguish the rabbinic commentary from the text itself, for which the square typeface was used. The Rashi typeface is also traditionally used for printed Ladino.

The Alefbet or Hebrew Alphabet consists of 22 letters. Hebrew letters are also used to denote numbers. (The modern numeral symbols like 1, 2 and 3 did not exist till the 7th century of the Common Era.)


Note that there are two versions of some letters. Kaf, Mem, Nun, Peh and Tsadi. They are written differently when they appear at the end of a word than when they appear in the beginning or middle of the word. The version used at the end of a word is referred to as Final Kaf or Kaf Sofit, Final Mem or Mem sofit, Final Nun or Nun sofit, etc. The version of the letter on the right is the final version. In all cases except Final Mem, the final version has a long tail.

See Wikipedia for more on the Hebrew letters.