The apostle Paul regularly uses stories from the Torah to explain things to his listeners. As a Rabbi himself and a student or disciple of the famous Rabbi Gamaliel (Acts 22:3) he had learnt that many events were not only of historical significance, but that they were ‘shadows’ of things to come. Many of the so called ‘histories’ in the Bible contain important spiritual principles.

We encounter one such example in 1 Corinthians 10, where Paul compares crossing the sea and living under the cloud of Gods presence, from the book of Exodus, to baptism in water and in the Spirit. He also compares manna to spiritual food and the water that poured out of the rock in the desert to spiritual drink (verses 3 and 4). Yet none of these things were sufficient for the children of Israel to inherit the promised land (see Hebrews 4:1-3, 10:38).

Water from the Rock 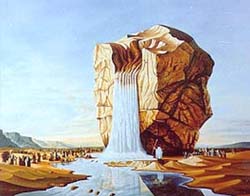 In 1 Corinthians 10:4 Paul writes about their fathers drinking from the rock that followed them through the desert. He is referring to a Jewish oral tradition that speaks of the rock rolling with Israel through the desert and providing them with water; the same rock that had been struck by Moses[1].

We read of two separate occasions on which Moses struck a rock. The first, took place in Exodus 17, at Horeb, at a place called Rephidim. In Hebrew ‘Rephidim’ means a place of rest, literally ‘a place that you can lean against’. It was the same place where Israel later defeated Amalek.

The second occasion that Moses struck the rock was in Numbers 20, at a place called ‘Kadesh’ meaning ‘holy.’ This happened in the first month of the Biblical year (see Exodus 12); the same month that the feast of Passover is celebrated. At Kadesh, all of Israel sang “Spring up, O well” (Numbers 21:17). On this occasion Moses was meant to have spoken to the rock, but instead he struk it twice (Numbers 20:11).

When Paul explains in 1 Corinthians 10:4 that the rock[2] that traveled with them through the desert was Christ, the reason that the rock should not have struck[3] again becomes all too apparent. Jesus was appointed to die for our sins, to be struck, once and for all time.

According to Biblical thinking, water is often connected with the Holy Spirit[4]. In Isaiah 12:3 we read that “…with joy you will draw water from the wells of salvation.” These words were sung by the priests on the very last day of the Feast of Tabernacles, as they drew bowls of water from the pool of Siloam and carried them up the steep ascent to the temple. The water was poured out by the altar as a prayer for rain and for the Holy Spirit. At exactly that moment in the proceedings, the Lord Jesus stood up and cried out: “He who believes in me, as the Scripture has said, out of his heart (innermost being) will flow rivers of living water” (John7:38, 39).

When there is not enough water flowing in our lives, it is recognisable in a lack of spiritual growth and little or no new life growing up around us.

It is quite understandable that we generally look for the cause outside ourselves. It is tempting to blame bad or inadequate teaching, or problems in the church. However we ourselves are most often the cause of a shortage of living. Our plumbing and pipes are blocked by sin, unbelief, lack of faith, indifference and other things. In that case it is really necessary to pray to the Father and ask Him to let us see where the hold-up is. Counseling can sometimes help, but its purpose should be to lead us to the water source and not to replace the water source. Living water cannot come via other people (unless you are not yet a believer). But if you are a believer you need to drink directly from the Rock, by praying in Spirit and in truth (John 4:23-24, 14:17, 15:26, 16:3), by eating daily (reading Gods word), and by stepping out in faith and doing what that word says (James 2:17). Of course receiving teaching and attending meetings are important (Hebrew 10:25) but they cannot be our only or even our primary source of nourishment.

When the living water begins to flow freely in our lives, it will be visible and will awaken new life in others around us. As it flows it will erode the channel it flows through, so that increasingly more water can flow.

How wonderful it is to know that the Rock of our salvation is in us (John 17:21) and travels with us. Through us He is able to make the driest desert blossom, because of the price that was paid 2000 years ago when the Rock was struck.

[1] Midrash Raba Vayikra 1:2. Paul was not concerned with the historical authenticity of events. Many of the oral traditions are meant only as Midrash, that is, as a story or parable to illustrate a Biblical principle. Paul used this story as an opportunity to teach the church in Corinth something. Tradition also tells us that the water coming out of the rock that was struck, formed a brook whose water was used to cleanse Israel from the consequences of their idolatry with the golden calf (see Deuteronomy 9:21).
[2] Paul uses the Greek word ‘Petra’ for rock, in this context. ‘Petra’ means a large rock. Jesus is the ‘Petra’, the rock and the cornerstone of the church. In Matthew 16:18, when Jesus says he is going to build the church ‘on this rock’ he was talking about himself. Peter, on the other hand, means literally a ‘piece’ or ‘flint stone’ from a rock. Unfortunately most translations do not clearly reflect this. The text should actually read: “And I also say to you that you are piece of the rock (Peter), on this rock (petra) I will build my church…” Jesus refers first to Peter, the flint stone and then to himself the rock (compare Matthew 21:42, Acts 4:11, Ephesians 2:20). This stone has been placed in Zion and not in any other city (1 Peter 2:6-7). The rock on which the temple was constructed is also symbolic of this rock. Jews call the rock under the temple the ‘Even Shtiyah,’ meaning foundation stone or wellspring (a rock from which water flows). The ark of the covenant was placed on this rock, and this was where atonement was made every year for the sins of all the people.
[3] In Hebrew, the word ‘struck’ can also mean ‘judge’.
[4] The first time we encounter the Holy Spirit in the Bible is in Genesis, hovering over the face of the water. The Lord Jesus received the Holy Spirit as soon as he rose up out of the water after being baptised (Matthew 3:16). See also Isaiah 44:3.